You are here: Home » News » KNOWLEDGE » How to improve the sensitivity of MEMS gyroscope?

How to improve the sensitivity of MEMS gyroscope?

According to the Chinese Journal of Science and Technology, MEMS gyroscope is an important inertial sensor for measuring the angular velocity of rotating structures, which has a wide range of applications in guidance, positioning and motion control.In order to improve the sensitivity of the gyroscope system, a research team led by Associate Professor Liang Feng from the School of Mechanical Engineering, Yangzhou University recently conducted an in-depth analysis of the "dynamic characteristics of MEMS gyroscope" and found that the use of piezoelectric film can greatly improve the sensitivity of the gyroscope. 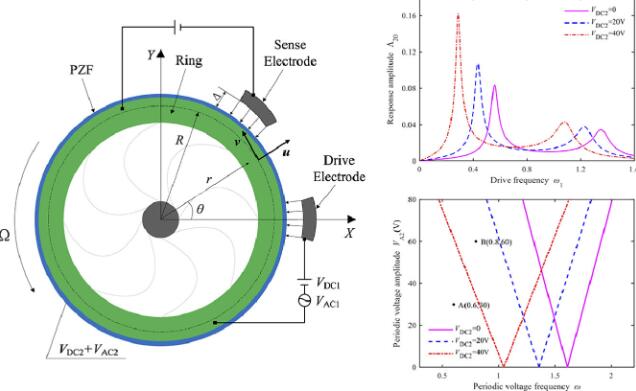 In recent years, domestic and foreign scholars continue to study a variety of micro gyroscopes and make a lot of improvements, but the performance improvement based on ring gyroscopes is mostly focused on the design, processing technology and material improvement.Liang Feng said, "At present, there are few studies on the nonlinear dynamics of the toroidal gyroscope system in the world. There are few studies on the influence of the nonlinear on the gyroscope sensitivity from the perspective of dynamics.Some of the existing literatures have simplified the governing equations of the system, but they have not studied the response of the gyroscope induction direction from the perspective of the fully coupled equations.

The dynamics of gyroscope system under various resonance conditions is studied in depth.They derived the energy expression of the rotating ring structure by the energy method and established the nonlinear dynamic equation of the gyroscope system by the Lagrange method.Based on the dimensionless dynamic equation, they analyzed the linear and nonlinear characteristics of the system respectively. Through the analytic solution of the equation and numerical simulation, the dynamic response of the system was discussed in depth.Liang Dongdong, a member of the team, said, "No one is interested in the study of gyroscope sensitivity from the perspective of dynamics. Our study will provide a new way to improve the sensitivity of gyroscopes and try to fill in the research gap.